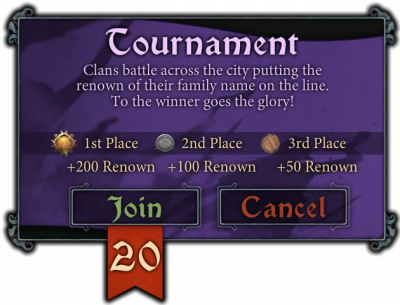 Tournaments are separate ladder events that are held weekly, to distinguish the strongest competitive players of The Banner Saga: Factions.

Tournament run for five days, from Wednesday 18:00 GMT to Sunday 23:00 GMT, and then are off for two days. Tournament games are played with the Expert Mode (30-seconds timer, +2 Renown per match) activated by default. Only teams with a power level of 12 are currently eligible to enter the tournament, and a weekly fee of 20 Renown is required to register. Tournament matches are limited at 5 per day, but will accumulate over the week, up to 25 matches per tournament.

Release: (see tables below; click on tabs to browse each year)