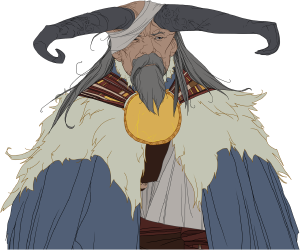 Jorundr is a varl non-playable character (NPC) met in the first part of The Banner Saga. He is the fifth king of the varl, ruling from the capital of Grofheim. His kendr (heir) is Vognir.

In the first part of The Banner Saga, end of Chapter 3, Grofheim is overrun and destroyed by a sudden and overwhelming dredge invasion coming from the north. Even as Hakon and Ubin witness the burning remains of the varl capital from the Two Spears, Jorundr is wounded but manages to escape, leading the remnants of the varl to Einartoft, the ancient fortress-city to the south.

Rook's caravan reaches Einartoft (Chapter 4), shortly after Hakon's caravan and just as the dredge army descends and lays siege to the fortress-city. Eyvind and Rook implore Jorundr to allow them to bring down the monumental varl bridge of Einartoft in order to prevent or, at least, delay the sacking of the city. The varl king stubbornly refuses, relying on Fasolt to hold the bridge whatever the cost. His resolve is broken only by the intervention of a legendary varl hero...

As the Skogr caravan departs together with Eyvind (Chapter 6), Jorundr decides to have the varl make a last stand in Einartoft, but not before sending off a warband lead by Hakon to Arberrang, the human capital in the south, to seek the aid of King Meinolf. Einartoft eventually falls to the dredge, led by Bellower himself. With the unknown fate of the fifth varl king and with Vognir mysteriously killed, the varl kingship passes on to Hakon.

Later in the game, in the second part of The Banner Saga (Chapter 13), the Ravens meet Fasolt and a small company of varl, flying the colors of Einartoft. The survivors confirm that Jorundr was indeed slain in the fall of the fortress-city.