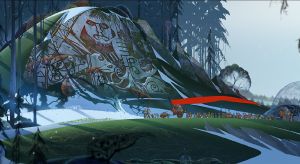 A caravan passes by the godstone of Hridvaldyr.

Hridvaldyr was the god of hunters and of wild beasts, occasionally seen roaming the land as both man and wolf. He was always depicted in effigy with his terrible spear.

The weathered stone doesn't see many visitors. Not much reason to travel so far east. When hunters come through they sometimes stop to give offerings, out of habit more than anything else now that the gods are dead.