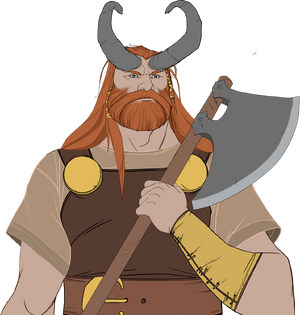 Vognir is a Varl non-playable character (NPC) met in the first part of The Banner Saga.

At the beginning of the events of The Banner Saga, Vognir is next in line for the Varl Kingship, kendr (heir) to King Jorundr. He is known for his courage and his prowess in the Wars against the Dredge. Vognir is known to confide in his old-time friend and kendr, Hakon, as well as in his trusted quartermaster, Mogr.

Vognir is met by Ubin in Strand, in the beginning of Chapter 1, where he lands with a Varl fleet escorting the human Prince Ludin, heir to King Meinolf, to the Varl capital of Grofheim, in order to forge a new human-Varl alliance. Vognir does not hold a good opinion of the arrogant young Prince but he is nonetheless tolerant of his tantrums and treats him courtly as befits his rank. Ubin caravans together with the Varl army, as both are headed to Grofheim, however fate abruptly ends Vognir's life in the village of Vedrfell.

Vognir is found dead in a pool of his own blood, face down in the mud, apparently slain by a small company of Dredge near the borders of the village. The only possible eye-witness to the slaying is prince Ludin who is rescued by Hakon, Mogr and Gunnulf, just as a Dredge Brute knocks him out.

Mogr notices that Vognir was hit from behind and broods over the possibility of foul-play, implying that Ludin might have had a hand in this, as the sullen Prince seemed constantly annoyed by Vognir's (and later Hakon's) orders and calls. Nevertheless, no actual evidence comes to light, but the shadow of Vognir's death is cast upon the unsteady human-Varl alliance.

In a brief conversation much later in the game, in the third part of The Banner Saga (Chapter 21), Mogr and Hakon agree that Vognir was most likely killed by 'a random slag' (derogatory term used by the Varl for the Dredge) in a stroke of bad luck to which all people, even legendary warriors, are subject to.