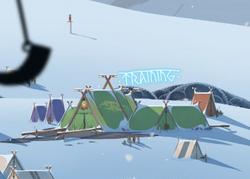 The Training Tent is a building accessed when your caravan is in Camp. The main function of the Training Tent is to play sparring battles so as to better prepare for the real battles to come, as well as to gain kills for promotions.

In the second part of The Banner Saga, two more functions were added to the Training Tent

The Training Tent allows you to test your Party against a team of clansmen of equal power. The enemy team will be randomly composed of Human and/or Varl units, never including one of your Heroes. Knock-outs during training fights will not injure your Heroes nor grant Renown, but they do let you test strategies in safety. In the second part of The Banner Saga, you can also collect Kills to promote your Heroes! Moreover, during the mock battle, the caravan trainer will give you hints about playing effectively, and has something to say about each ability. Make sure to test out new Heroes as they join the caravan! Click the "End Training" button, in the Escape Menu or in the south-east of the board, to stop the battle at any time.

In the second part of The Banner Saga, Training Scenarios award you with Renown when successfully completed and are unlocked as you progress through the story and/or meet new Heroes. You have access to up to one Scenario at any given time; once you complete it, a new Scenario is unlocked, if you've progressed enough through the story. You can complete each scenario and get the Renown award only once, but you can take as many efforts as you like. In order to complete a scenario, you must fulfill a set of 1-4 predefined objectives, in no particular order. Killing all enemies does not necessarily complete a Scenario. Heroes knocked-out in a Scenario are not Injured.

In the second part of The Banner Saga, the caravan trainer offers the option to convert some of your Clansmen into Fighters. This requires a few days, so your caravan must have enough Supplies. Fighters cannot Forage, like the Clansmen, and consume more Supplies. However, they are useful in Wars as they decrease the battle difficulty ('danger') and they limit Clansmen casualties thus granting more Renown.