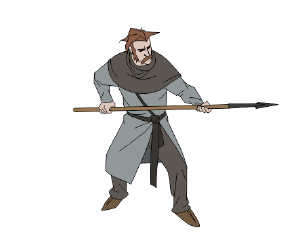 The Spearman (or Lancer) is a base-class unit introduced in the first part of The Banner Saga.

Units belonging to the Spearman class have the following attributes:

Each kill the Spearman makes encourages allies to fight harder, granting 1 Willpower to the Spearman and any adjacent allies. The Willpower of all units cannot exceed their maximum value.

When promoted to Rank 6, Heroes of the one promoted class gain the ability of the other (there in no option).