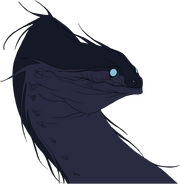 The Serpent is a mysterious being of immense size.

The Serpent is encountered in Chapters 4 and 5 of the first part of The Banner Saga. Its movement in the physical-world causes earthquakes that break mountains, empties lakes and destroys cities. Its first appearance is during the Dredge siege of the the Varl stronghold of Einartoft, where it strikes terror in the hearts of men, Varl and Dredge alike. Even Bellower, the Immortal Sundr, is disturbed and recoils before it. However, the Serpent does not show any open hostility and departs from that scene.

What little information about the Serpent is known is attributed to Juno, a mender of great mental powers, who communicates with it while in a dream-world. The Serpent recognizes her order by its ancient name, the Valka. It proclaims that it is part of a prophecy where it is supposed to destroy humanity during the end of the world; it seems frustrated that an unnamed "Darkness", spreading from the north and driving the Dredge southwards, might beat it to that goal. The Serpent ends the 'discussion' with an unsuccessful attempt to destroy Juno.

In The Banner Saga 2 he tries to swallow Juno to regain his power taken from him by her resurrection, but is unsuccessful in devouring her. Eyvind stabs him with lightning hundreds of times to recover Juno. This results in him bleeding with his green acidic blood poisoning and acidifying the water.

In The Banner Saga 3, it is revealed that the Serpent is a creation of the same god who made the Dredge, but unlike them it has no creative impulses or desire to be more than a weapon of his revenge against Loom-mother. It gestated within the Dark Sun that gave light to the underground habitat of the Dredge but was released as half-born when Eyvind utilised the power of the Dark Sun to ressurect Juno. The Darkness is an aspect of its power that it regains control of, giving it the ability to warp other forms of life into its army. It was born prematurely, however, and so can be slain.

A possible inspiration for the Serpent 'character' might be the dragon Níðhöggr, the great dragon who gnaws at the root of the world-tree in Norse mythology. Another likely candidate is Jormungandr, the World Serpent, an immense serpent said to be large enough to wrap itself around the world, who's awakening is supposed to herald the beginning of Ragnarok, the Twilight of the Gods.