The prowess in combat of your heroes is measured by their Rank, which is similar to the standard term Level used in most D&D RPG-systems. Correspondingly, the act of Leveling-Up a hero/character is called Promotion.

This article refers to the single-player game, The Banner Saga, but some of the mechanics also apply to Factions, the online free-to-play multiplayer game.

ATTENTION: The game uses the term 'Rank' to measure the power of several different things:

Ranks of heroes (and items) are usually displayed by with a gold number on a red disk, in the bottom-right corner of the hero-portrait (and item-icon). 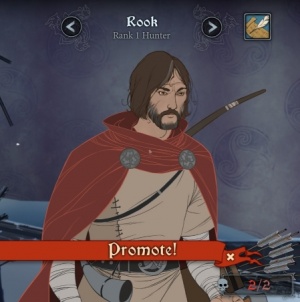 Promotions can be done via the 'Heroes Tent', accessed while in camp or when you are inside a friendly village or city, by clicking on the red 'Promote!' banner appearing below the character portrait.

To promote a unit, you will need to spend Renown. Be warned: Promotions are final, meaning that you cannot get the Renown 'invested' on that promotion back! You are always asked to confirm the spending action before proceeding.

The only criterion for promotion is the number of Kills, i.e. number of enemy-units knocked-out during combat; this number (along with the Kills needed for promotion) is displayed in the box marked with a skull, below the character's portrait in the 'Heroes Tent'. When a hero acquires the necessary number of kills for promotion, a purple banner will notify you of the fact during the battle and a special screen at its conclusion.

The following table summarizes the requirements for promotions along the available Ranks, for the The Banner Saga: Factions.

The following table summarizes the requirements for promotions along the available Ranks, for the first part of The Banner Saga.

Note: Kills from Training matches do count for promotion.

The requirements for promotion in the second part of The Banner Saga are slightly modified, as follows:

Note: Kills from Training matches (and Scenarios) do count for promotion.

The requirements for promotion in the third and final part of The Banner Saga are once again modified, as follows: 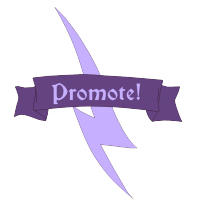 Each time a Hero is promoted to a higher Rank he becomes 'stronger' in the following senses:

In the online game, there are some important differences compared to the above mentioned rules:

The following table summarizes the stats of all the playable characters in game. Base-stats apply at the moment that each character first joins your caravan and is available for use in a battle. Max-stats apply for each character in particular, measuring the maximum potential he has. Note that many characters may start out as quite weak but later become very powerful, either due to their max-stats or to their active abilities.

The stats of the heroes available in the first part of The Banner Saga are listed in the following table.

The stats of the heroes available in the second part of The Banner Saga are listed in the following table, ordered by the story point they are first encountered.