Iver is an important Varl Hero in The Banner Saga series.

When Skogr was still young, Iver wandered into the town’s center, startling the settlers from Rundwall who had rarely seen a Varl before. He’s never said why he left Varl lands to help men build a small town, but each chieftain in Skogr’s family line is happy to have him. He’s known Rook since the man was young, and the two quickly formed a kinship.

The Strongarm smashes an adjacent unit with his shield knocking it back up to 4 tiles and pushing it through anyone in the way. Battering Ram does Armor damage to the target, adding 1 more Armor damage for each unit it passes through.

The ability can be used on both friend or foe, making it versatile in many situations by changing a unit's position on the board. Ramming a Shieldbanger does not trigger the Return the Favor.

Note: The way that Iver pushes his enemies changes after Chapter 4, as he loses the ability to hold a shield, but the result is the same.

In the second part of The Banner Saga, when Iver reaches Rank 6, he can choose a second active ability between:

A character who performs a melee attack on a Shieldbanger loses 1 point of Armor for each successfully landed hit.

Return the Favor triggers every time the Shieldbanger takes Strength or Armor damage from an adjacent enemy, which can make it devastating to hit him with attacks that strike multiple times, like Bloody Flail. Ranged attacks do not Return the Favor.

After Chapter 4 and the battle on Einartoft bridge where he loses the ability to hold a shield, Iver's Return the Favor passive ability will be replace by Heavy Impact (Warrior varl).

Saga 1: Iver joins your party in Chapter 2. He is also available in Chapter 4 and stays until the end of the game.

Saga 2: Iver stays with the Skogr caravan until the end of Chapter 12, where he leaves with Juno and Eyvind on a special errand. He is the lead POV character in Chapter 15, serving as the epilogue of the second game.

Saga 3: Iver is the other lead POV character aside from Rook/Alette from the beginning of Chapter 17. 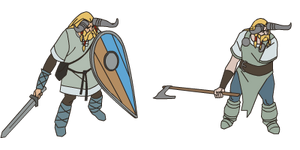 Iver's sprite, before and after losing his shield arm.

Saga 1: There is no event leading to Iver's death. However, Iver will become temporarily unavailable in Chapter 5 and he will be subject to a 'transformation' that will alter his stats as well as his passive ability.

Saga 2: There is no event leading to Iver's death. However, as described in the previous section, he will split from the Skogr caravan in the end of Chapter 12.

Saga 3: Whether Iver survives at the end of the game when Eyvind performs a ritual on Juno to stop the world's destruction, depends on the ending you get based on Eyvind's predisposition or whether you kill him. His predisposition is influenced by some of your actions throughout the series and dialogue choices.

If you tell him that making a deal with the Serpent to return his power while sparing Juno wasn't what she wanted in case his predisposition isn't high enough, he will battle the Serpent resulting in the world being completely desolated.

If Alfrun performs the ritual to seal Juno within the Dark Sun at the White Tower, the tower is instantly destroyed and probably kills Iver along with the Ravens. If Alfrun is dead after the fight with Bolverk and Eyvind is killed by Iver, Juno is the sole survivor.