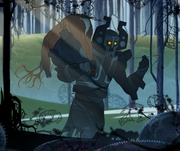 A lone Dredge hunting in a forest near Skogr

The Dredge are a race of humanoid beings supposedly made of stone. Their own name for themselves is akin to "sculptors". They are usually clad in darkly colored suits of armor, made either of stone or metal, and have bright yellow eyes. They inhabit the cold northern plains of Valkajokull and, in more recent times, subterranean networks further south.

The Story of the Dredge[edit | edit source]

Deep in the shadows of the Age of Myth, the Loom-Mother discovered how to weave life into her tapestry, the fabric of the universe. She created the beasts of land and sea, and wove the elements of reason into her creations of humans. All of these threads - some short, some long - had a beginning and an end.

Other gods attempted to mimic her, but lacked the skill or patience necessary to master the art. Some gods twisted beasts into new shapes and monsters. Others wove her creations together, making cross-breeds of human and animal, and so were created the varl and the horseborn. One spiteful god took the humans and twisted them wretchedly, hid them away in the depths of the earth, and they became the dredge.

With unending threads of life, the dredge numbers grew along with their need for more space and more food. Their god prodded the dredge into waging war against the other creations. The dredge became hated and feared among the mortals. Some believed them to be the dead returned to the world to punish the living. The dredge, it turned out, could be killed, but only through bloody battle.

Disgusted, the Loom-Mother punished the errant god, but in her anger accidentally killed him. Panic spread among the gods, and thus began the war among the gods which left every god unmade.

The mighty varl pushed away the legions of dredge, driving them farther and farther into the northern territories. As the tide turned, the varl began venturing into the deep north and slaughtering dredge settlements for sport. Eventually, the dredge retaliated with vengeance and hatred, ravaging human and varl lands in a bloody struggle that lasted nearly a decade. This conflict became known as the Second Great War. Ultimately, the Valka took up their enchanted spears and drove the dredge away to a mysterious fate.

As penance for their hubris, the varl established massive forts in the frozen north to remain vigilant against any future return of the dredge. Any re-emergence of the dredge was quickly stamped out, and over time they all but disappeared.

But, soon after the Sun mysteriously stopped in the sky, the dredge have suddenly reappeared, and are swarming the land from the mountains to the sea, threatening all in their path.

In Part 3, it is revealed that the Valka did not actually drive away the Dredge; rather, they discovered that the Dredge resented their creator and lack of knowledge in skills other than war. In return for a new home and leaving other races mostly alone, the Valka taught the Dredge civilian crafts which they used to build their own civilization.

There exist both male and female Dredge, although it is said that only the males take to the battlefield. As later revealed, this is either wrong or has changed due to necessity (given the invasion of Dredge lands by the Darkness): Dredge Slingers are female!

Dredge vary in size and shape, being anywhere from man-sized to taller than Varl. However some varieties, the Sundr (see below), are even larger. They cannot speak and communicate by making vibrations or echoes.

Though the first generation of dredge was made just to kill and destroy, the second generation that was bred is more susceptible to peace towards other races. The friendly Dredge Stoneguard Kivi belongs to this second generation.

The Dredge have mastered the use of a volatile and explosive stone, which they fashion into weapons, and even into heavy armor which they permanently fuse onto their bodies.

The Dredge have their own form of communication, which sounds to most humans and Varl like indistinguishable warbling. The Menders, and Alfrun, are able to understand and speak with them.

It is revealed in the third game that the Dredge refer to their race as the "sculptors", or more accurately, "we who shape the stone".

The Dredge were a threat to the Varl and Humans during the Second Great War fought in ages past. There is great animosity between the Varl and the Dredge, such that the Varl often refer to them as 'slag', a demeaning term. Even when the world was being destroyed by the Darkness, most of the surviving Varl preferred to fight the Dredge rather than let them take refuge in Arberrang so they don't turn into the Warped.

The Dredge also had a rivalry with humans who allied with their sworn enemy, the Varls, in the Second Great War to fend them off. They were however much more sympathetic to them, knowing Varl actions had pushed the Dredge into a genocidal war. Some humans, like the Valka (and Alfrun) were able to form a bond of trust with them.

Most of the Dredge seem to be especially afraid of Iver, referring to him as "the Destroyer", due to his slaying of the Sundr Raze.

Dredge apparently have have their own variety of Menders, called Stonesingers, whose gender is not defined, but the existence of both males & females is implied.

In the second part of The Banner Saga, a friendly Stonesinger is met and can even join the caravan and help in one story battle.

Stonesingers are revealed in the third part to have been a product of the menders training the dredge as part of a deal to stop the hostilities in the Second Great War.

The Sundr are Dredge demi-god champions that serve as commanders of their armies. They are respected and feared possessing overwhelmingly powerful abilities. Among scholarly Menders, it is believed that Sundr are in a sense immortal, i.e. they are not subject to death of old age, like humans are. However, no new Sundr can be made, thus their number is very limited. The only named Sundr are Bellower, Raze, Eyeless, Ruin and Chime; there have been mentions of other Sundr that go by the names of Walker and Seethe.

The Dredge were thought by other races to be probably residing in Valkajokull, being driven off by the Valka after the Second Great War, if not entirely wiped out. They were also thought to have retreated underground.

Their actual home is the Underworld, where they reside in pockets built into large rocks by them. Like the surface, it also has a Sun which is dark and much more powerful than the Sun that gives light to the surface. The Dredge habitat also contains large unknown creatures which are reported to often come to the surface.

Although they are mostly hostile to humans, a few trusted ones like the Valka and Alfrun are allowed to travel in their homeworld unharmed. The menders use the fortresses with the suffix "horn" as a portal to travel to the home of the Dredge. A prominent feature is the White Tower which was built by the Valka.

Dredge units come in different varieties and their stats and attributes resemble those of the human and Varl units in many respects. For more information, refer to the categories below.

This section contains the Dredge units that appear in the first part of the The Banner Saga.

The first enemy types encountered in The Banner Saga. Grunt, Stoneguard and Scourge have a melee attack-range and can be thought of as the Dredge analogues of human Raider, Varl Shieldbanger and Varl Warrior classes, respectively. However, unlike the human and Varl classes, these melee Dredge all share a common passive ability of negative nature, Splinter.

Dredge Slingers are first encountered midway through the first part of The Banner Saga and resemble human Archers in having the same movement and attack range. They come in three different sub-classes: Slag, Spark and Fire Slingers, and share a common passive ability of random nature, Back Off.

In the first part of The Banner Saga you will come across special Dredge units that serve as bosses and have multiple abilities of special nature: Stonesingers and Bellower.

During the first and second chapter of the first part of The Banner Saga, two non-standard Dredge units are encountered:

This section contains the Dredge units appearing in the second part of the The Banner Saga. All the units from the first part also appear.

In the second part of The Banner Saga, Dredge are often in the company of Skulkers, regular and vile (large) ones. These dog-shaped creatures have the ability to walk through Dredge units and to become invisible.

Dredge Hurlers are a new type of ranged-attack units encountered in the second part of The Banner Saga. They are very similar to the Slingers but their passive ability, Distraught, is an improved version of Back Off.

Several new classes of special Dredge units were encountered in the second part of The Banner Saga:

Few new Dredge units appeared in the third part of the The Banner Saga. Interestingly, the third game saw the addition of Dredge hero units that could join the player caravan!

The story of the dredge is inspired by the Norse concept of draugr or haugbui: undead vikings that return to smite the living. This is what many mortals believe them to be. The more enlightened mortals, however, realize that there is much more to be learned.