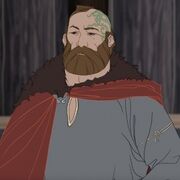 This unnamed character is the chieftain (Jarl) of Skogr. His wife is Oddleif.

At a young age he was considered lucky to woo a beauty like Oddleif, nowadays he is considered lucky to have married a woman who knows how to run a town. Apart from his wife, he also relies on the master huntsman, Rook, and the taciturn Varl, Iver, to manage the affairs of his small woodland village.

During the events of the first part of The Banner Saga, Skogr is overrun by a sudden Dredge invasion. The population forms a caravan to abandon the village in an organized manner, fleeing towards Frostvellr, the nearest fortified city. Depending on the player choices, the chieftain is either killed or seriously wounded during this escape. Following her husband's downfall and having no children, Oddleif passes the Skogr Banner on to Rook, deeming that he is more suitable to carry the heirloom. This authorizes him to lead the caravan and its people's fates.

Regardless of whether or not the chieftain survives the invasion, late-game dialogue states that Oddleif was widowed, suggesting that he succumbed to his wounds at some point off-screen. If the caravan is ambushed by Onef's men, Oddleif will later inform Rook that he died at Einartoft.