Canary is a Hero character encountered in the second part of The Banner Saga.

The largest tribe of Horseborn —the only tribe seen by most humans in this age— is lead by this slender, charismatic warrior. Canary —or Cainánóiridhe to other horseborn— is eager to learn what she can of humans, varl, dredge, and all the ways of the world as it currently stands. Whether she wants to keep it that way is anyone's guess.

The Horseborn Cantref spears her target and pins him to the ground, dealing regular Strength damage and inhibiting Movement.

The Horseborn Cantref uses a javelin tipped with a deadly poison to make sure her enemy doesn't forget her after the initial sting of her attack passes. The ill target becomes unable to secure their own ground and units can move through him/her.

Poisons like this are often used against high Strength enemies to wear them down over time or on a large unit that is blocking paths to other areas of the board.

The doses do not stack together, but a second dose will serve to refresh the damage over time and keep the target afflicted.

Rank 1: 1 Strength damage per Round, for 3 Rounds

Rank 2: 2 Strength damage per Round, for 3 Rounds

Rank 3: 3 Strength damage per Round, for 3 Rounds

While moving, each Willpower the Horseborn Cantref spends allows her to travel 2 tiles instead of 1.

Canary is encountered by the Skogr caravan in Chapter 14, at Fieldgate. After defeating her herd, she surrenders to you and joins your Roster.

Canary appears in the early Concept Art of the game, which implies that she is a key character in the story. 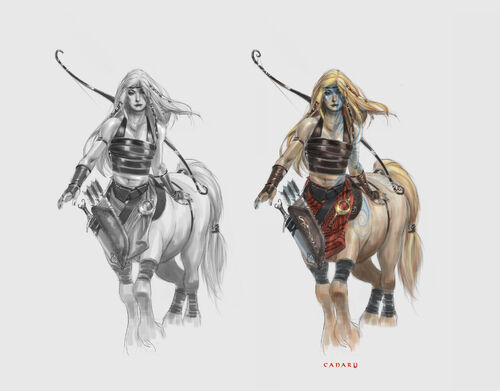 Sketches of Canary packing bow & arrows and a shortsword, instead of javelins, and having a beige skin color instead of cream.
Retrieved from "https://bannersaga.gamepedia.com/Canary?oldid=16174"
Categories: